How to Interview People for Grit

I just finished the book “GRIT: The Power of Passion and Perseverance” by Angela Duckworth. Duckworth is a professor at the University of Pennsylvania and has studied Grit in the context of success for over a decade. 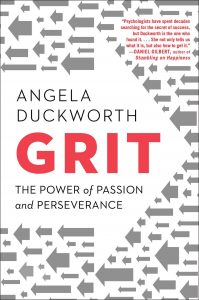 The results of her studies: Grit matters.

Instinctively, when I speak with leaders of organizations they know that grit plays a big role in sustained performance. Our team talks about grit a lot too – it’s one of our hiring criteria when we bring on new “strange renegades” (as we like to call ourselves). But how do you screen a potential candidate for grit?

Duckworth may have the answer.

In chapter 12 “A Culture of Grit” Angela breaks down one decade-long study she performed to isolate the characteristic of grit among her sample subjects. Duckworth created a simple survey asking sample subjects about high school activities. Here are the questions:

The results of the study were clear. Those individuals who scored higher on the “grit test” were higher performers later in life (Angela tracked the subjects over 10 years). More interesting, when Duckworth attempted to isolate the variable of grit (as compared to intellect, socio-economic factors, etc.) grit was the strongest predictor of success. Again, grit matters.

Hiring a Security Team with Grit

If you are building a team and responsible for hiring – it may be worth building a similar test. Instead of high-school, maybe its possible to ask about college or career progress. Here are three potential questions to add to your interview schedule:

1 – What activities do you participate in the security community?
2 – For how long have you been involved?
3 – What achievements did you earn during your tenture?

If you or your team need help taking your security program to the next level, please contact us.